Langley has built a capability in suborbital and ground-based research that has been in high demand since the Science Directorate’s initiation in the late 1960s.

We are committed to delivering science that is balanced between Research & Analysis, technology development, airborne science and flight development.​

We study atmospheres using active and passive remote sensing and in-situ measurements. Through our ground and flight hardware development, we infuse technology and gather science observations that produce knowledge, information and insight that informs policy and serves society. We create essential, global data records utilized by the international science community.

We provide and maintain capabilities to ensure effective and affordable delivery of that knowledge. 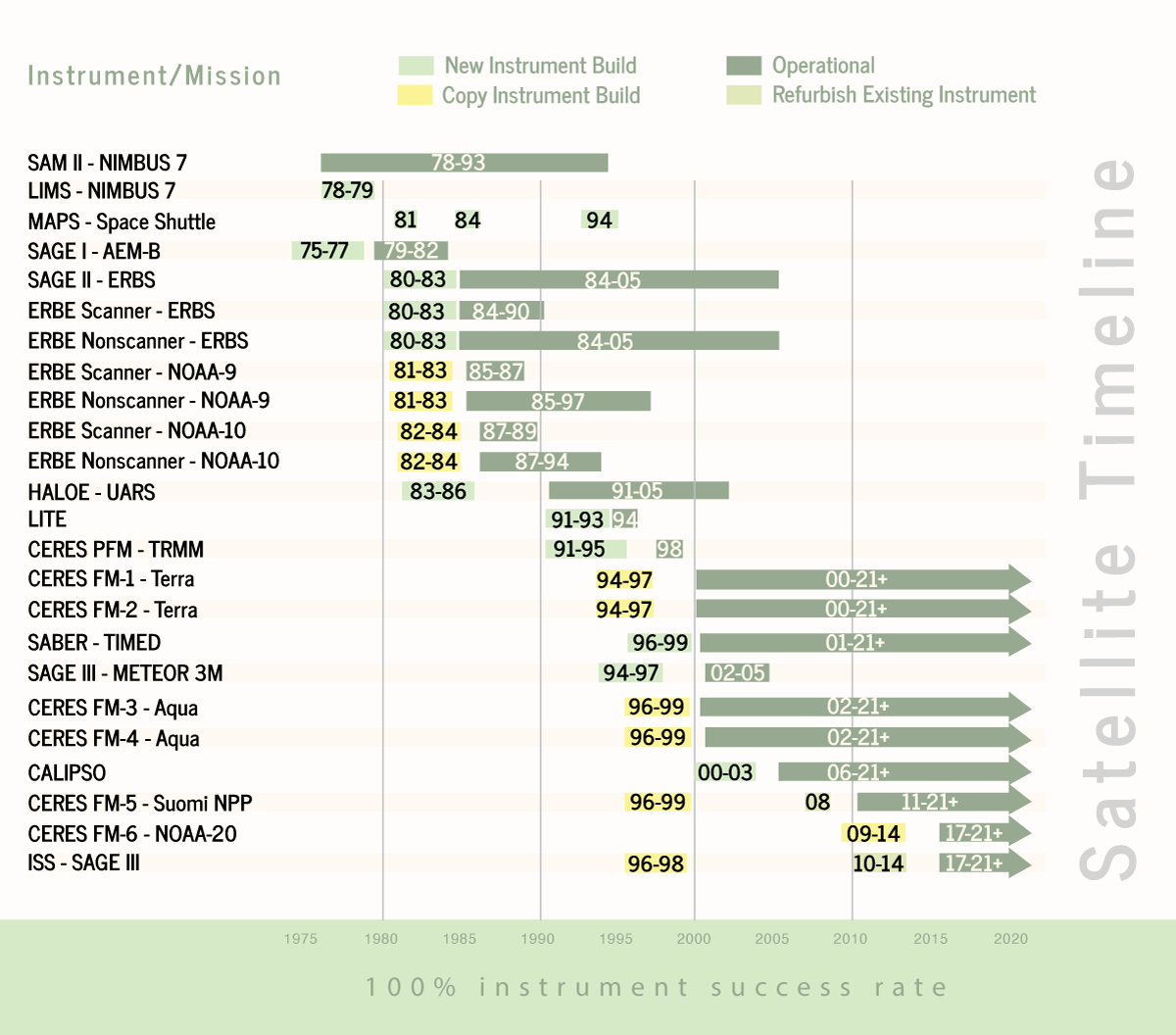 We support LaRC proposal teams as they prepare for, develop, and submit winning proposals. We work across all disciplines and Directorates, making the proposal process straightforward and efficient. 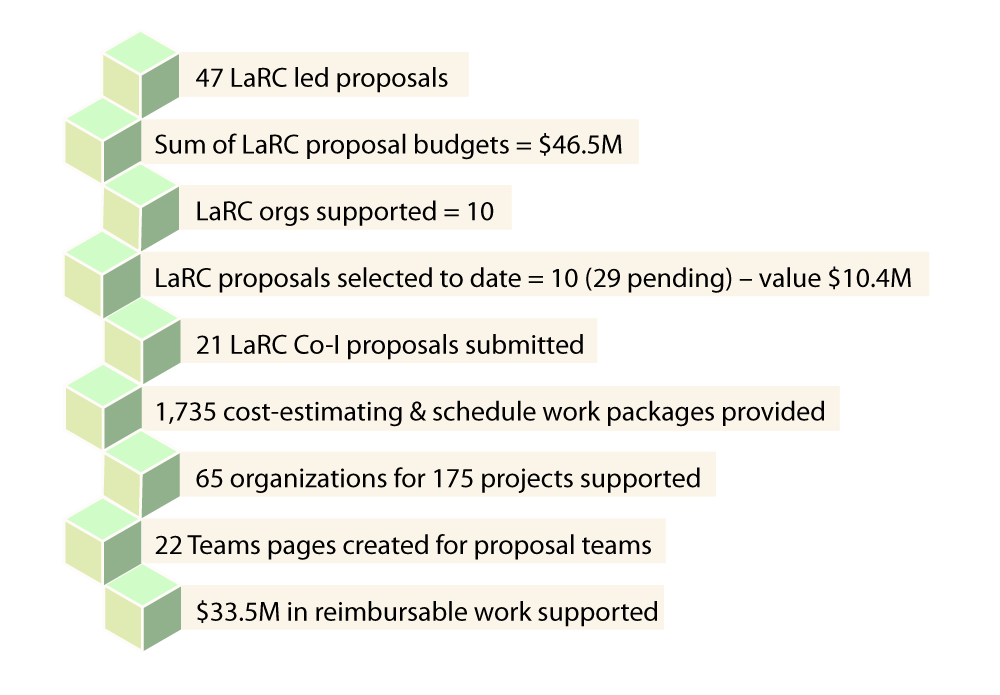 Our Earth Science research stretches across four main areas: Air Quality, Radiation and Climate, Atmospheric Composition and Active Remote Sensing. In these areas, we are involved in a number of scientific initiatives, including advanced instrument development, field and space-borne experiments and data retrieval, analysis and archival. We also take significant pride in our ability to receive and share scientific data through the Atmospheric Science Data Center (ASDC). We further extend our research to the public through our efforts in Science Education.

Radiation and Climate
Understanding what’s changing our climate – and the implications for our planet.​
Air Quality
We observe pollutants around the world and provide scientific data used to study the impact on human health and agriculture.
Atmospheric Composition
We study the variations in and processes that affect aerosols, clouds, and trace gases, which influence climate, weather, and air quality.
Lidar Remote Sensing
We utilize Lidar technology on satellites and aircraft to learn more about our atmosphere, what’s in it, and how it’s changing.
+ View the Lidar Timeline

NASA Langley contributes to NASA’s Applied Sciences Program, which helps people across the world use NASA data to solve big problems right here on Earth. The areas we support can help individuals and institutions improve our environment, food, water, health and safety.
Water Resources
Health & Air
Take a deep breath. It’s easy to overlook the importance of the air we breathe and its effects on our health — but it’s one thing our team is always focused on.
Food & Agriculture
The Food Security & Agriculture Program Area promotes the use of Earth observations to strengthen food security, support market stability and protect human livelihoods. Together with partners in the United States and around the world, we help bolster food security, improve agricultural resilience and reduce price volatility for vulnerable communities.
Capacity Building
We utilize Lidar technology on satellites and aircraft to learn more about our atmosphere, what’s in it, and how it’s changing.
+ View the Lidar Timeline
Disasters
Understanding what’s changing our climate – and the implications for our planet.​
Ecological Forecasting
We observe pollutants around the world and provide scientific data used study the impact on human health and agriculture.
Renewable Energy
2021 Applied Sciences Highlights

An interdisciplinary team of educators, scientists, technology experts and communication specialists collaborate with the education community to bring authentic Earth science practices and real-world data into the classroom. We create opportunities for Citizen scientists around the globe to participate in data collection and contribute to our understanding of the Earth system and global environment. 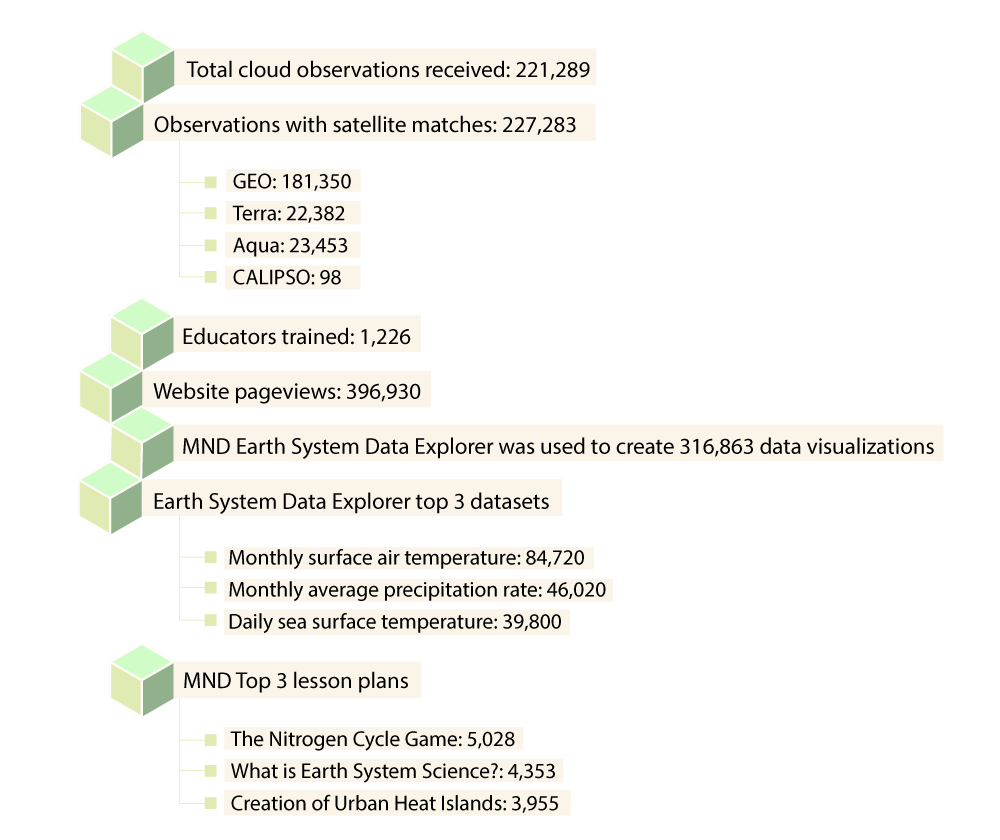 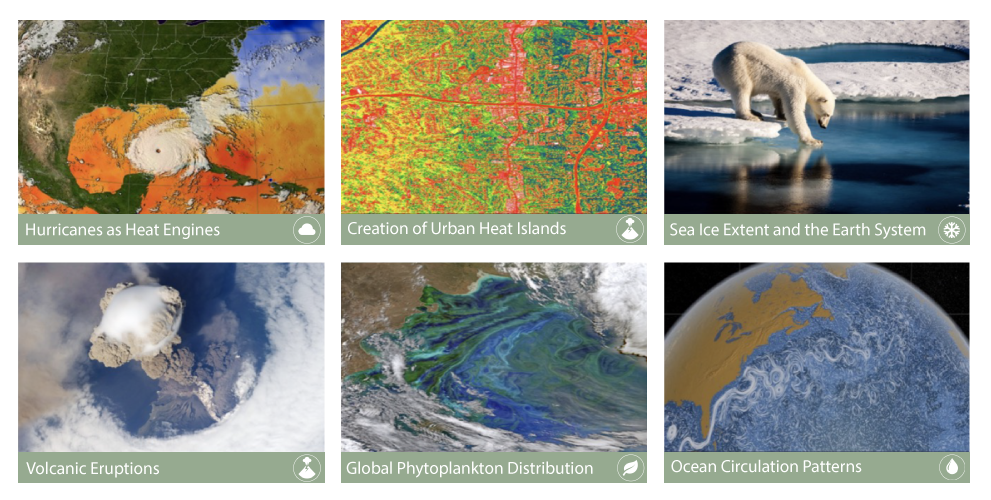 Our atmospheric research also contributes to planetary science, heliophysics & astrophysics through the design, development, modeling and simulation of Entry, Descent and Landing (EDL) systems for Earth and planetary bodies, and also through our research on space weather and atmospheres of Terrestrial Type Exoplanets and planets.

NASA’s most prestigious honor awards are approved by the Administrator and presented to a number of carefully selected individuals and groups of individuals, both Government and non-Government, who have distinguished themselves by making outstanding contributions to the Agency’s mission.​

When Close of Business hits, Science Directorate employees continue to make the most of their time. In these uncertain times, balancing work and life is key. Enjoy a glimpse into some ‘off hour’ activities.
2021 Highlights

At any given time, there is a fire burning somewhere on Earth. NASA Langley’s Dr. Amber Soja joined NASA experts to take a closer look at how fires are part of our changing planet during a NASA ScienceLive episode titled, “A World of Fires.” As the climate warms, it has directly affected the way fires occur, with longer fire seasons and more extreme fires that are harder to suppress. With a fleet of satellites orbiting Earth, NASA has a unique perspective to keep an eye on these fires, the impact they have on ecosystems, and how smoke degrades air quality for local communities and populations downwind from biomass burning.

A joint campaign led by NASA and the National Oceanic and Atmospheric Administration (NOAA), Fire Influence on Regional to Global Environments and Air Quality (FIREX-AQ) is targeting broad questions about the chemical and physical properties of fire smoke, how it is measured and how it changes from the moment of combustion to its final fate hundreds or thousands of miles downwind. All of these have implications for public health. In 2019, NASA Langley contributed mission science leadership. The NASA Langley National Airborne Sounder Testbed - Interferometer (NAST-I) sensor was included as part of the aircraft payload for the ER-2 component. On the ground, the NASA Langley Aerosol Research Group Experiment (LARGE) operated a van full of instruments to catch the smoke as it settled.

Read: Through Smoke and Fire, NASA Searches for Answers

TEMPO (Tropospheric Emissions: Monitoring of Pollution), a NASA Earth science instrument that will dramatically advance our understanding of air quality over North America, secured a satellite host and ride into space with Maxar Technologies. In September, US, European and Korean team members for the planned new geostationary Earth observation satellites; TEMPO, the Geostationary Environment Monitoring Spectrometer (GEMS), Sentinel-4, Geostationary Carbon Cycle Observatory (GeoCARB) and the Geosynchronous Littoral Imaging and Monitoring Radiometer (GLIMR), met to foster the exchange of ideas on the upcoming Geostationary Air Quality Constellation. The TEMPO mission is a collaboration between NASA and the Smithsonian Astrophysical Observatory.

Most of us don’t think twice about breathing. In fact, the average adult takes around 20,000 breaths per day. Understanding the air we breathe is essential to life on Earth. In 2019, NASA Langley’s Dr. Patrick Taylor and Dr. Jim Crawford were interviewed for a Health Journal article titled, “The Air Out There: Understanding Air Pollution.”

Read: The Air Out There: Understanding Air Pollution

For the past four years an international research team sponsored by NASA and the Indian Space Research Organization (ISRO) has been studying the Asian Tropopause Aerosol Layer (ATAL), an area of enhanced aerosol particles that appears in the summertime. Using balloon-lofted instruments, the Balloon measurement campaign of the Asian Tropopause Aerosol Layer (BATAL) has collected data to better understand this seasonal atmospheric phenomenon and its potential impact on water resources, ozone, weather and climate. In 2019, the team collected data on trace gases and the properties of aerosols and ice crystals. NASA Langley Research Center scientists deployed to India to understand how pollution in Asia is transported into the stratosphere during the active summer monsoon, an annual phenomenon that brings humid weather and torrential rainfall to India and Southeast Asia.

Read: Using Balloons to Track Pollution into the Stratosphere

Demonstrating new technologies is vital to progressing our knowledge and understanding in key science areas. In 2019, NASA Langley's High Altitude Lidar Observatory (HALO) and the Doppler Aerosol WiNd lidar (DAWN) flew on the NASA DC-8 as a part of the Atmospheric Dynamics Mission-Aeolus (ADM-Aeolus) calibration and validation mission, demonstrating a new water vapor profiling capability. Upon completion of the DC-8 flights, HALO also demonstrated the rapid reconfigurability of the system by reconfiguring from water vapor DIAL to methane DIAL measurements within a matter of days to support NASA's Atmospheric Carbon and Transport - America (ACT-America) campaign.

Dr. Laura Judd (NASA LaRC/SSAI) was selected to join NASA’s Health and Air Quality (HAQ) Applied Sciences Team as an Associate Program Manager. Entering this position in November 2019, Laura tracks and manages a portfolio of Health and Air Quality projects focused on the implementation of air quality standards, policy, and regulations for economic and human welfare. Additionally, she contributes toward strategic planning efforts for advancing innovative and practical uses of NASA Earth science data and capabilities to enhance decision making processes by public and private organizations.