The Asian Summer Monsoon (ASM) provides a transport pathway for polluted air in the boundary layer to reach the Upper Troposphere and Lower Stratosphere (UTLS). Enhanced levels of Carbon Monoxide have been observed in the UTLS for more than a decade during the ASM, encompassing a large region from the eastern Mediterranean Sea to Western China, including India. Recent observations from the Cloud Aerosol-Lidar and Infrared Pathfinder Satellite Observations (CALIPSO) space-borne lidar have revealed a maximum in aerosol concentration in the same region. The so-called Asian Tropopause Aerosol Layer (ATAL) refers to this enhancement of aerosol observed during the ASM between 13-18 km. Since 2014, researchers from NASA Langley and the National Atmospheric Research Laboratory (NARL) in Gadanki have worked together to obtain measurements of the optical, physical and chemical properties of the ATAL using balloon-borne scientific payloads.

This year, the Balloon measurement campaign of the Asian Tropopause Aerosol Layer (BATAL) took place between July, 31st and August, 30th at the National Atmospheric Research Laboratory in Gadanki and at the balloon facility of Tata Institute of Fundamental Research in Hyderabad. After the ratification of an agreement between NASA and ISRO, we are glad to announce that the BATAL campaign will continue each summer for the next 4 years.

The BATAL effort aims to i) characterize the optical, physical and chemical properties of the ATAL, ii) study the processes leading to ATALs formation and ii) assess the interactions between ozone, water vapor, cirrus clouds and the ATAL. To address these science objectives, we have selected specific balloon systems and scientific payloads.

More specifically, optical properties of aerosol populating the ATAL have been measured using light backscatter measurements from a small two-wavelength backscatter sonde, called COBALD. We had 15 balloon flights with the COBALD sonde this year. The size distribution of aerosol populating the ATAL has been inferred using an Optical Particle Counter (OPC), which was developed by NASA Langley and flown onboard 5 balloon flights this year. Enhanced particle concentrations of ~100 parts/l for particle sizes r > 0.15 micron were found near the tropopause (~17 km). Finally, the chemistry of the ATAL has been studied using an aerosol impactor system onboard medium-duration plastic balloon flights fabricated and launched at the balloon facility of Tata Institute of fundamental Research in Hyderabad. The aerosols collected onboard the zero-pressure flights were sent for Ion Chromatography analysis at the Physical Research Laboratory, in Ahmenabad.

The processes leading to ATALs formation are studied by compiling satellite observations of deep convection from INSAT 3 D and HIMAWARI-8 and running simulations of the GEOS-Chem chemistry transport and GEOS-5 climate models at Langley and the WRF model at NARL to be compared with balloon data. One balloon flight during BATAL 2017 on August, 2nd from Gadanki was launched at the periphery of a large Mesoscale Convective System. These unprecedented balloon measurements in convective storms will shed light on the dynamics of MCS systems and will be compared with vertical wind observations from the MST radar in Gadanki.

The 2017 BATAL campaign is a continuation of a successful collaboration between NASA Langley, NARL and TIFR. This year, colleagues from PRL joined and provided technical support to analyze aerosols collected on filters using Ion Chromatograph. 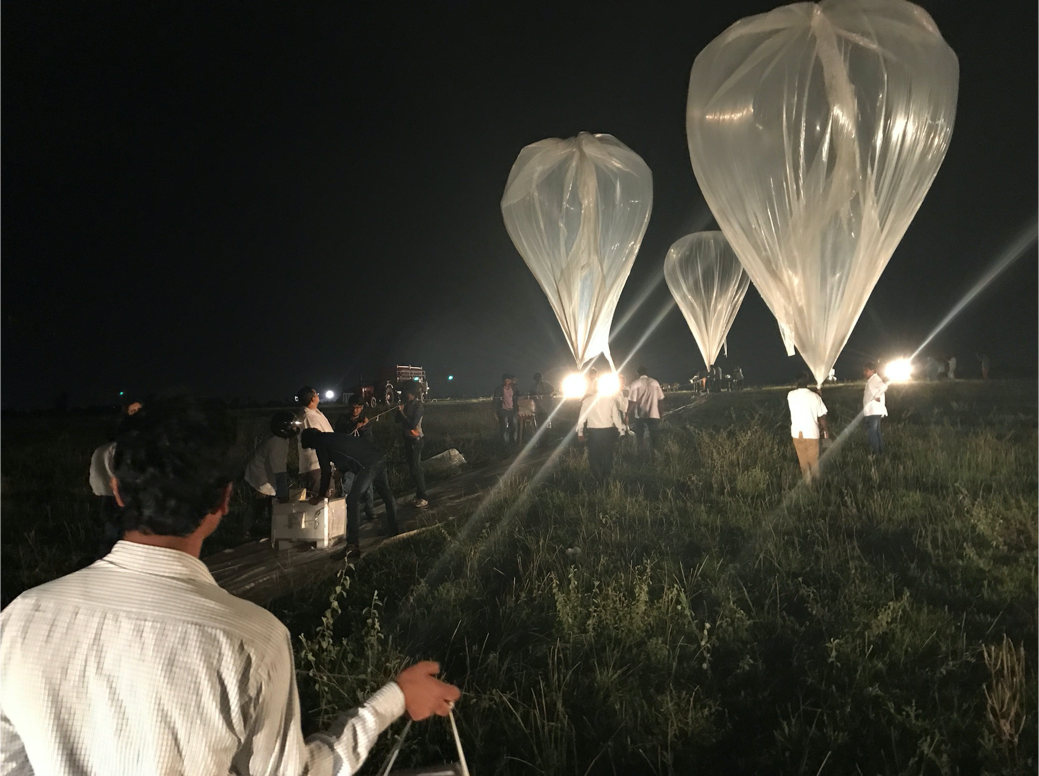 Launch preparation of a zero-pressure balloon flights from Hyderabad.