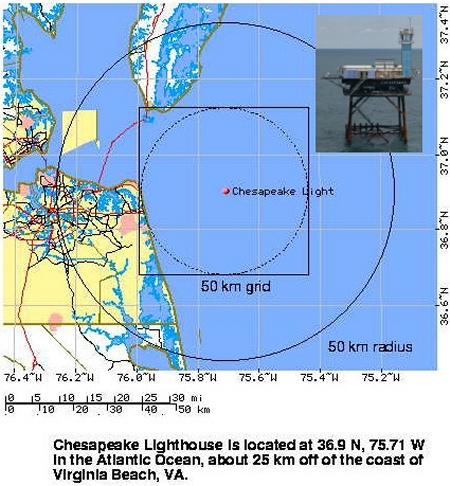 After 17 years of continuous operation, the CERES Ocean Validation Experiment (COVE) at Chesapeake Light Station, has been indefinitely suspended due to structural concerns. In September 2016 Chesapeake Light was sold in GSA auction to a private investment consortium. All pertinent equipment as well as most instrumentation, power and communication hardware has been removed as of December 2016. All data acquisition operations were discontinued at that time.

COVE was located on the Chesapeake Light Station, 25 km East of Virginia (near the mouth of the Chesapeake Bay). The Chesapeake Light Station was previously owned by the Department of Energy from October 2012 – September 2016 and the Coast Guard from 1965-2012. The site is located outside of the surf zone and far enough away from shore to make it an excellent validation site for space-borne retrievals of cloud and aerosol microphysics. The platform itself is small enough (25×25 meters) that the usual “island effect” associated with oceanic sites is negligible. Aerosol climatology at this location indicates optical depths and Angstrom exponents that are consistent with polluted urban aerosols, which is not surprising given its close proximity to Virginia Beach and Norfolk, VA. These urban aerosols will also have an impact on the marine clouds at the site. Not all air masses at Chesapeake Light Station are polluted, however, as easterly winds from occasional synoptic systems and frequent sea breezes provide a marine aerosol source. Hence, the Chesapeake Light Station is an excellent location to study the impact of anthropogenic aerosols on cloud microphysical properties (i.e., the indirect effect).

The team looks forward to the “data analysis phase” of the CERES Ocean Validation Experiment conducting extensive post-analysis on the COVE data, writing papers and publishing their findings in scientific journals.