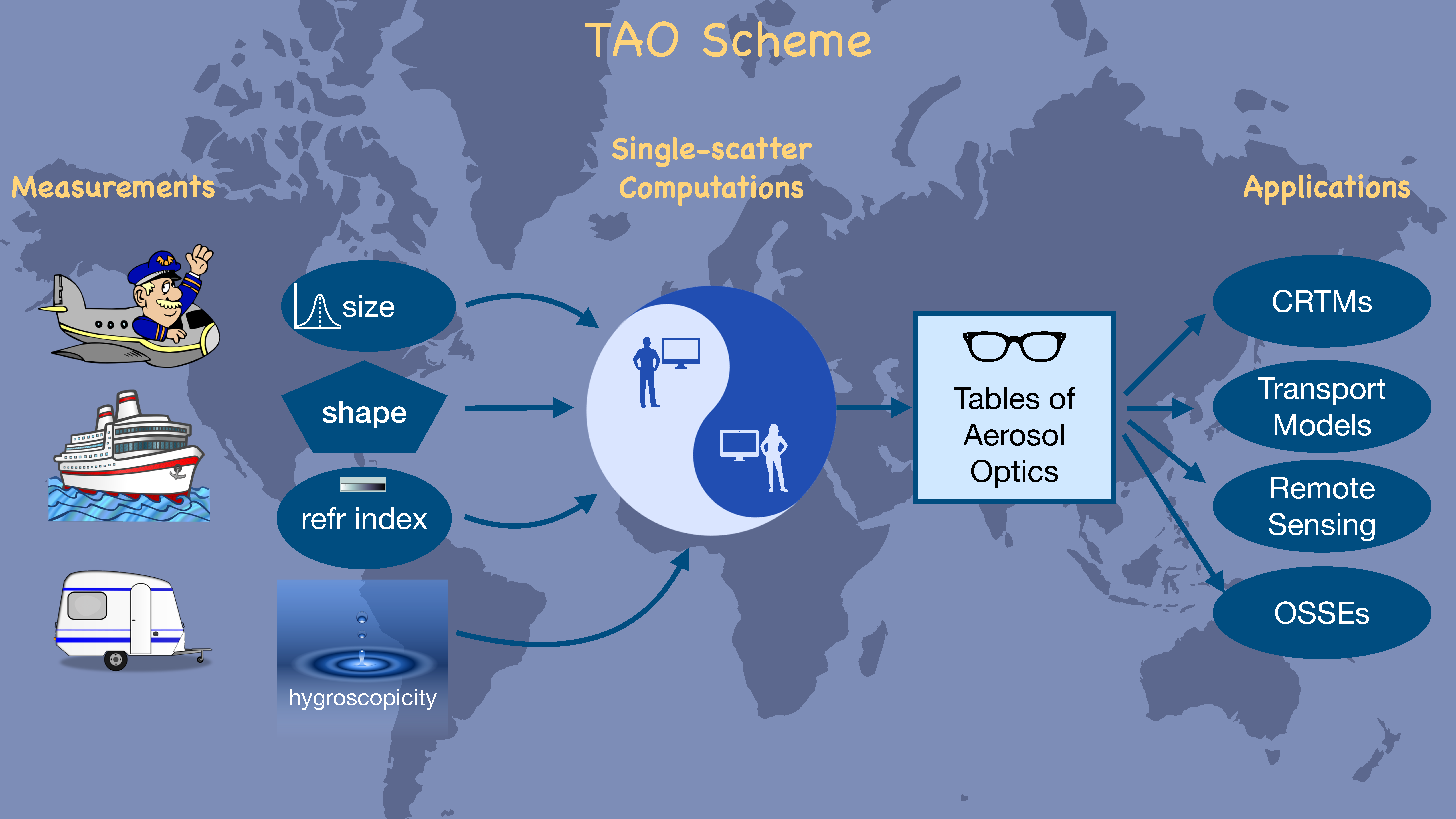 The Table of Aerosol Optics (TAO) is a community repository of optics computations (extinction, absorption, single-scatter albedo, lidar ratio, etc) that are useful for global models and remote sensing applications. TAO expands upon historical efforts (e.g., Shettle and Fenn, 1979; d’Almeida et al., 1991; Koepke et al., 1997; Hess et al., 1998) by building an open database that uses recent measurements and new computational techniques for non-spherical particles. The ‘open’ aspect of TAO is important, since the size distributions, refractive indices, and morphological recommendations of today will undoubtedly yield to different values in the future; the open framework of TAO allows scientists to keep adding new computations to the database as the science evolves.

Originally conceived by Arlindo da Silva, TAO is meant to be a community repository where specialists can put their computations for other scientists to use. So for instance, some groups are advancing new techniques that can accommodate complex fractal aggregates of black carbon, while other groups are working on realistic irregular shapes for mineral dust. The TAO database gives these scientists a place to distribute their products. As TAO grows, modelers and remote sensing specialists will look to TAO as a place to find a wide variety of choices for testing.

Meanwhile, global modelers can also use TAO to lobby for new tables that accommodate their needs. For instance, coarse particles like mineral dust and sea salt sediment at rates that depend upon size, so a single coarse mode does not fit well with their dynamic models. Consequently, the measured coarse mode needs to be divided into several smaller modes for the dynamics process, and these modes are later re-combined as external mixtures for the optical computations. Modelers need to make these needs known to the people who are computing the optical properties of dust and sea salt in order to fully leverage what TAO offers.

At the present time, TAO is a highly fluid and loosely organized collection of optical tables that are available here. However, users should expect a bumpy ride until the TAO group becomes established — file format and existence may change quickly!

Modern aerosol tables were first compiled by Shettle and Fenn (1979), and this report represented a major step forward for the community at a time when Mie computations (and the computing power to run them) were not nearly as accessible as they are today. Since Shettle and Fenn (1979) is an Air Force report and such reports are not published in huge numbers, it was difficult for some scientists to find a copy. Thus, Shettle and Fenn (1979) was followed by d’Almeida et al. (1991), which is essentially a book version of Shettle and Fenn (1979). Releasing the tables to a private publisher in this way resulted in a much wider distribution of the tables than is generally achieved by a government press; here again, this was a major advancement for the scientific community. The next major step was the publication of Kopke et al. (1997) and Hess et al. (1998), both of which were accompanied by digital versions of the same aerosol optical tables that originated with Shettle and Fenn (1979). This was another major improvement over the previous state of affairs, as it enabled ready access for hundreds of scientists on the new World Wide Web of that day. The tables were later improved with Koepke et al. (2015), who re-computed the optical properties of the OPAC dust using spheroid shapes (instead of spheres) and added their results to the OPAC database.