The North Atlantic Aerosols and Marine Ecosystems Study (NAAMES) is an interdisciplinary investigation resolving key processes controlling marine ecosystems and aerosols that are essential to our understanding of Earth system function and future change. NAAMES is funded by the NASA Earth Venture Suborbital Program and is the first EV-S mission focused on studying the coupled ocean ecosystem and atmosphere.

Plankton ecosystems of the global ocean profoundly affect climate and life on Earth. NASA’s ocean color satellite record tells us that these invaluable ecosystems are highly responsive to climate variability, with changes in ocean production impacting food production, uptake of atmospheric carbon dioxide, and emission of climate-regulating aerosols. Intergovernmental Panel on Climate Change (IPCC) simulations suggest that surface ocean temperatures will warm by +1.3 to +2.8 degrees C globally over the 21st century, with major consequences on physical properties of the surface ocean where plankton populations thrive.
The pressing question is, how will these changes alter plankton production, species composition, and aerosol emissions?
Today, even the sign of these potential changes remains unresolved. Our ability to predict Earth System consequences of a warming ocean and develop realistic mitigation and adaption strategies depends on resolving conflicting hypotheses regarding the factors controlling plankton ecosystems and biogenic aerosol emissions .

NAAMES consists of four, combined ship and aircraft field campaigns that are each aligned to a specific event in the annual plankton life cycle. Ship-based measurements provide detailed characterization of plankton stocks, rate processes, and community composition. Ship measurements also characterize sea water volatile organic compounds, their processing by ocean ecosystems, and the concentrations and properties of gases and particles in the overlying atmosphere. These diverse data are extended over broader spatial scales through parallel airborne remote sensing measurements and in situ aerosol sampling that target ocean properties as well as the aerosols and clouds above. The airborne data crucially link local-scale processes and properties to the much larger scale continuous satellite record. Integrating the NAAMES observations with state-of-the-art climate and ecosystems models enables the creation of a process-based foundation for resolving plankton dynamics in other ocean regions, accurately interpreting historical satellite records, and improving predictions of future change and their societal impacts.

The North Atlantic plankton bloom is among the most conspicuous biological events annually recorded by satellite ocean color measurements, yet even fundamental controls on the bloom’s magnitude and interannual variability are controversial. The bloom climax is one event within an annual plankton cycle that essentially oscillates between a decreasing-biomass phase beginning in the summer and an increasing-biomass phase beginning in Winter-Spring and ending with the bloom climax in Spring. 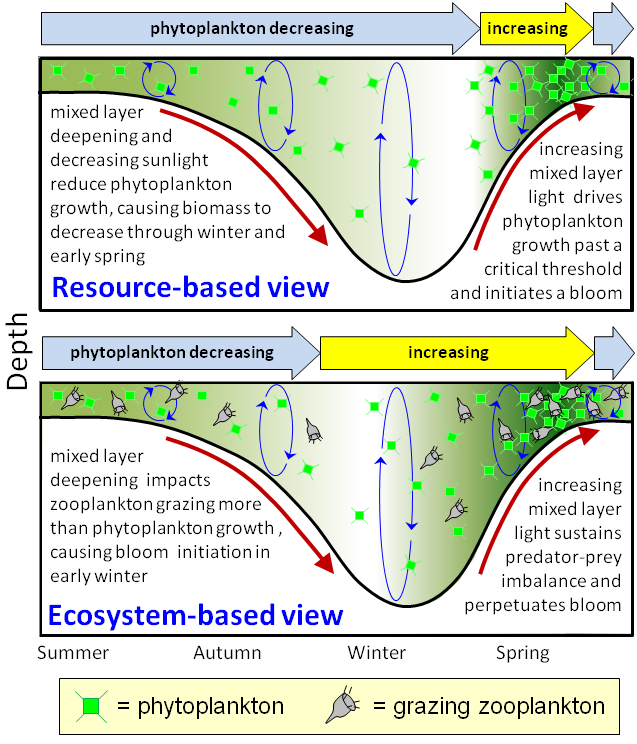 The traditional interpretation of the spring bloom focuses exclusively on phytoplankton responses to current growth conditions. It assumes that phytoplankton concentrations decrease in parallel with growth rate during Autumn and Winter and then attributes the bloom to rapid springtime phytoplankton growth rates driven by high nutrients, shallower mixing, increasing light, and warmer temperatures (Resource-based View in Figure 1 at right). This view is so commonplace that it is portrayed as a cornerstone concept in oceanography textbooks and is confidently explained in public media, such as the British Broadcasting Corporation’s (BBC) The Blue Planet series. This traditional “Resource-Based View” predicts that a warmer ocean will yield larger and/or earlier blooms.

A competing interpretation of blooms has recently emerged from analyses of NASA satellite ocean color data, autonomous sensor measurements, and ecosystem modeling. These studies suggest that the bloom actually begins in late Autumn, when physical processes disrupt the balance between phytoplankton growth and losses. This disruption continues until the mixed layer stops deepening and temperatures begin to rise, after which the bloom is perpetuated by phytoplankton growth rates outpacing parallel increases in losses to grazers (Ecosystem-Based View in Figure 1). According to this “Ecosystem-Based View”, harsher winter conditions (e.g., colder temperature, deeper mixing) cause stronger disruptions and yield greater phytoplankton biomass. Conversely, milder winter conditions under a warmer future ocean will be associated with weaker blooms.

Without resolution, these contrasting hypotheses on bloom regulation prevent consensus on even the
sign of future change in ocean productivity, and thus, the implications on seasonal carbon dioxide
uptake and fisheries!

NAAMES provides sustained observations, targeted field process studies, and advanced ecosystem
modeling necessary to reconcile these competing hypotheses and understand blooms as one element in
a roughly repeating annual cycle. This is accomplished through NAAMES Objectives 1 and 2.

Objective 1: Characterize plankton ecosystem properties during primary phases of the annual cycle in the North Atlantic and their dependence on environmental forcings.

During NAAMES, water-column and surface layer ecosystem properties are continuously monitored over
the entire 5-year investigation using autonomous in situ float sensors and satellite observations. Guided
by these and historical observations, NAAMES field campaigns provide detailed system
characterizations targeting the increasing- and decreasing-biomass phases and the two transition
events of the annual cycle (as shown in Figure 1 above). 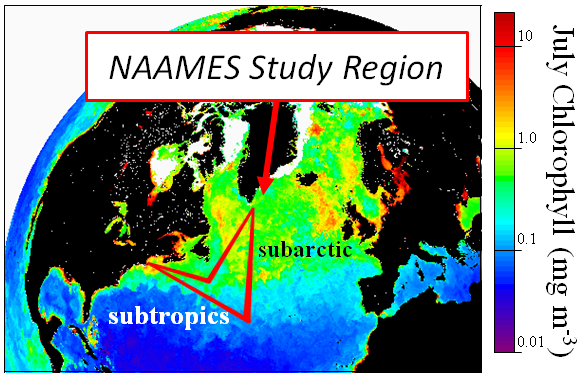 Meanwhile, airborne remote sensing of plankton stocks and depth distributions from a NASA C-130 provides essential data on spatial variability to address scaling issues from local measurement to satellite pixel scales. Bridging these scales has long been a challenge for understanding ocean ecosystem variability due to the disconnect between high resolution field data over intermittent time periods as compared to less-spatially-resolved, but continuous satellite observations. Thus, the combined ship-airborne measurement strategy employed by NAAMES makes a critical contribution to the ocean ecosystem scientific record by capturing the full range of scales of plankton ecosystem properties during each of the primary phases of the annual cycle.

Objective 2: Determine how primary phases of the North Atlantic annual plankton cycle interact to recreate each year the conditions for an annual bloom.

While the traditional “Resource-Based View” is supported by a number of past field studies, a primary shortfall of these earlier investigations has been their nearly universal focus on the final stages of the plankton bloom without having context to critical events occurring in previous seasons. In contrast, the “Ecosystem-Based View” has arisen from analyses of model, satellite, and optical data covering the complete annual plankton cycle (shown in the bottom portion of Figure 3), but it lacks the mechanistic field studies necessary to demonstrate key ecosystem processes and resolve the role of change plankton community composition on bloom formation. 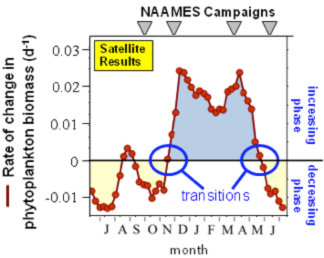 Figure 3: NAAMES campaigns capture the
phytoplankton seasonal cycle and will resolve the
conflict between the resource- and ecosystembased
views. Adapted from Behrenfeld and Boss,
2014. Reprinted with permission from the Annual
Review of Marine Science, Volume 6. Copyright
2014 by Annual Reviews,
http://www.annualreviews.org.

Four field campaigns are conducted during NAAMES to validate remotely sensed properties, evaluate scaling issues between in situ and satellite data, and, most importantly, characterize ocean ecosystem and aerosol processes and properties critical to the interpretation of satellite and model results. Each of these four campaigns targets a specific event in the annual plankton cycle as shown in Figure 3.

Two of the NAAMES field campaigns are dedicated to characterizing system properties during the increasing and decreasing biomass phases, while the other two target the transition periods. These four events correspond to contrasting states in the balance between phytoplankton growth and losses. The biomass increasing and decreasing phases reflect conditions that permit a sustained (multiple months) imbalance between growth and loss. The transition periods represent conditions causing a change in the sign of this balance (i.e., growth overcomes losses or losses overcome growth). It is our incomplete understanding of the mechanisms responsible for these events that is the basis for the conflicting bloom hypotheses, and NAAMES will reconcile this conflict through its comprehensive, multi-season observational strategy.

Objective 3: Resolve how remote marine aerosols and boundary layer clouds are influenced by plankton ecosystems in the North Atlantic. 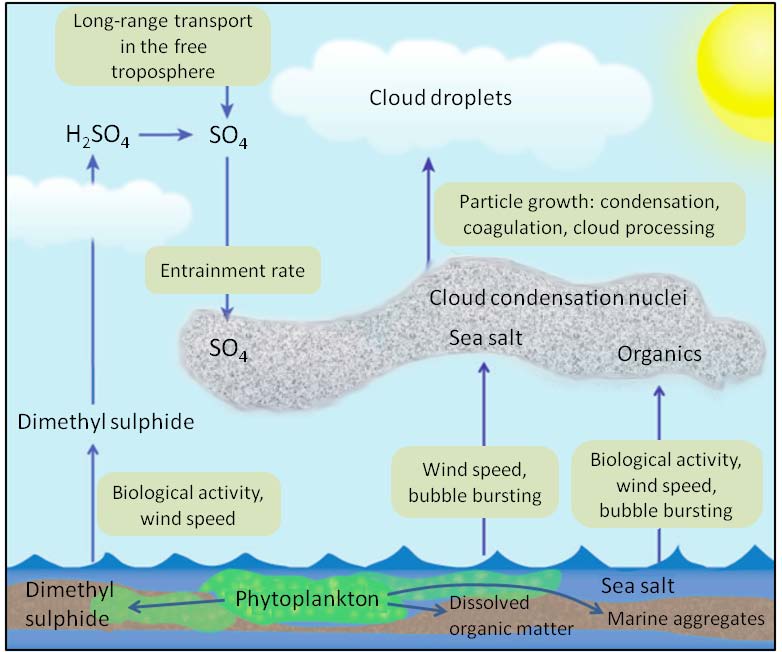 Ocean ecosystem changes in a warmer world will likely induce significant changes in the chemical, physical, and optical properties of aerosols within the marine boundary layer. However, these consequences remain highly uncertain. This is because marine aerosols consist of a complex mixture of sea salt, non-sea-salt sulfate, and organic species formed through a variety of production pathways (shown schematically in Figure 4 at right). The relative contribution of each aerosol type changes across the particle size distribution and exhibits a strong seasonal association with ocean biological activity (Gantt-Meskhidze, 2013). Understanding the changes in the burden and properties of atmospheric aerosols is important because these aerosols can act as cloud condensation nuclei (CCN) to form clouds that alter Earth’s radiation balance, and hence, climate. In fact, the indirect effects of aerosols on clouds are the single largest uncertainty in current Intergovernmental Panel on Climate Change (IPCC) estimates of global radiative forcing since preindustrial times.

NAAMES focuses on the North Atlantic where models indicate particularly strong cloud sensitivity to aerosol perturbations, making this an excellent test region for process-level studies on ocean ecosystem-CCN-cloud linkages that are also relevant to other remote regions (e.g., southern oceans). The large spatial and temporal range in plankton stocks and species diversity in the North Atlantic improves distinction between biologically-impacted and non-impacted areas. This variability has contributed to previously observed correlations between chlorophyll concentrations (see Figure 2 above) and organic aerosol fraction transported to coastal measurement stations and changes in remotely-sensed cloud reflectivity. However, a pressing need remains for interdisciplinary field campaigns that directly connect in situ measurements of ocean ecosystem properties to in situ atmospheric measurements with high spatial resolution. Only by doing so, can a mechanistic understanding be achieved of the ocean ecosystem-CCN-cloud relationships required for physics-based parameterization of Earth system models.

NAAMES utilizes a combination of ship-based, airborne, and remote sensing measurements that directly link ocean ecosystem processes leading to aerosol precursors, emissions of ocean-generated aerosols and precursor gases, and subsequent atmospheric evolution and processing. In this way, the NAAMES observational strategy is an end-to-end approach that quantifies the contribution of each aerosol component in Figure 4 during each of the major phytoplankton lifecycle events depicted in Figures 1 and 3 above.