Volcanic eruptions are well known to affect aviation and climate. From ash particles spew into the atmosphere, they pose serious hazards for aviation safety due to the abrasive effects of volcanic ash to aircraft engines. However, ash particles are considered to have a short lifetime and are assumed to be removed quickly from the atmosphere. But gas-phase compounds such as H2O, CO2 and SO2 can remain longer. The latest, SO2, is converted into H2SO4 through oxidation with OH and rapidly transformed into sulfuric acid droplets, a mixture between sulfuric acid and water.

These tiny sulfate droplets have a lifetime of several years and produce a wide spread layer which can block part of solar radiation and reduce surface temperature on earth, also known as the umbrella effect.

The latest major eruption on earth was in 1991, from Mt Pinatubo. Since then, smaller but more frequent eruptions have affected the aerosol content of the stratosphere. One of them occurred in Indonesia in February, 13th 2014, the Kelud eruption.

As a part of the A-train, the CALIOP space-borne lidar made remarkable observations of the Kelud plume as shown by the curtain of backscatter coefficient (Figure 1). The plume top is seen up to 25 km, a remarkable level for such an event and the highest altitude reached by a volcanic eruption since more than two decades. The event caused a champagne-like eruption of explosive magnitude. Scientists will soon realize that this was not the only unique characteristic of the volcano. 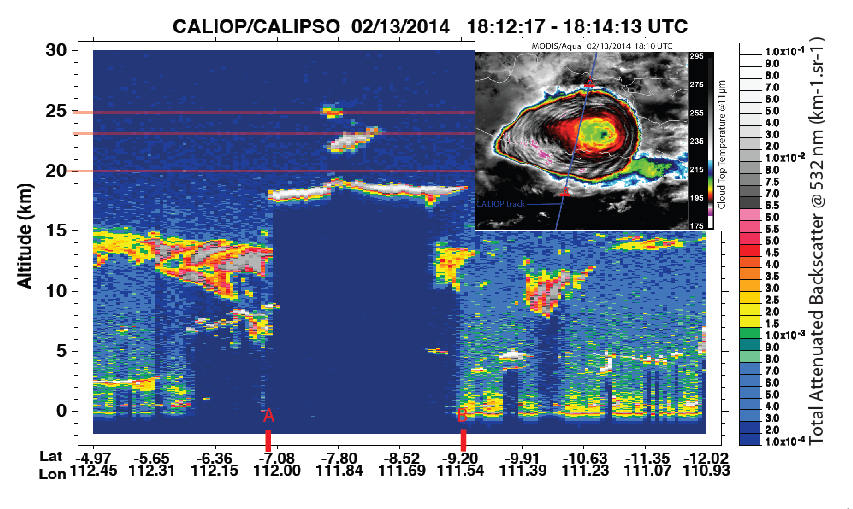 Figure 1. (Top right corner) Brightness temperature (11 microns) from MODIS/Aqua together with the CALIOP/CALIPSO total attenuated backscatter lidar profiles along the orbit track. CALIPSO shows that the plume reached up to 26 km with a main cloud near 18-19 km

As a part of the A-train, the CALIOP space-borne lidar made remarkable observations of the Kelud plume as shown by the curtain of backscatter coefficient (Figure 1). The plume top is seen up to 25 km, a remarkable level for such an event and the highest altitude reached by a volcanic eruption since more than two decades. This event was exceptional by his explosively, a champagne-like eruption, and scientists will quickly realize that was the only particularity of this volcano.

During the eruption, the ATTREX aircraft mission was going on in Guam, a small island in the middle of the Western Pacific. Soon after the eruption, stratospheric winds blew the volcanic plume toward an area where the Global Hawk, an unmanned UAV converted for atmospheric research, was used to study high altitude cirrus clouds. While this mission could have represented a unique opportunity to study this plume, it never happened.

Thus, a team of scientists from NASA Langley and the University of Wyoming decided to mount a field mission dedicated to study this plume. After a few weeks, observations from the CALIPSO lidar revealed unusual properties of the plume. Through depolarization measurements, sensitive to the geometrical properties of aerosol, scientists rapidly deduced that this plume was not only made of sulfuric acid droplets, the liquid and spherical particles expected to be produced from SO2 a few weeks after an eruption. Indeed, aspherical particles, crusty materials, and probably ash, was still largely present in the plume.

At this time, it became clear that additional measurements were needed to verify and validate observations from the CALIPSO lidar but also obtain ampler information of the physical and optical properties of these volcanic aerosols that satellite alone could not give. Within a few weeks, a proposal was submitted to NASA HQ and funding became available to launch small and large research balloons to study the Kelud plume, the KLASH (KeLud-ASH) campaign.

The KLASH campaign took place between 14-21th May 2014. Scientists deployed small and large aerosol payloads from the Northern Australian Territory North to intercept the Kelud plume and retrieve information on the physical and optical properties of volcanic aerosols which already circumnavigated the world several times in the tropical belt. The campaign consisted of the launch of 5 small COBALD backscatter sondes under weather balloons from Bureau of Meteorology in Darwin. In addition, a balloon flight combining Optical Particle Counters (OPCs) from the University of Wyoming took place from Corroboree, South of Darwin (Figure 3).

For flight guidance, a plume forecasting system was put together based upon the assimilation of CALIPSO observations of the plume into a Lagragian transport model. The movie below shows the evolution of the Kelud plume for a few days over the tropical belt and over Australia.

Figure 2. Movie representing the evolution of the Kelud plume across the tropical belt between 7-21th May 2014.

The plume is seen to remain in the tropical stratosphere between 18-21 km with regular excursion over North Australia and the Darwin region spotted with the red square just before the campaign.

During the KLASH campaign, all balloon flights did see the Kelud plume in the lower stratosphere.Figure 3 shows extinction profiles derived from the COBALD backscatter sonde and OPC flights togetherwith an average profile from CALIPSO. All profiles show the Kelud plume between 18-22 km with some differences in extinction values.

Overall, data gathered during the KLASH campaign have been used to validate CALIPSO observations of volcanic ash, derive the size distribution of volcanic ash and sulfate in the plume and constrain radiative calculations.

We showed that 20-28 % of the radiative forcing of this volcanic plume more than 3 months after the eruption was exerted by volcanic ash and not entirely induced by volcanic sulfate aerosol. This results represents significant changes in our understanding of the lifetime of volcanic ash in the atmosphere and its longer than expected impact on our climate system.