The Earth is continuously bombarded by high-energy cosmic rays, the primary source of ionizing radiation in the atmosphere that increases the risk of cancer and other health effects. Commercial aircrews are classified as radiation workers, and are among the most exposed occupational group. In any given year, a pilot absorbs as much radiation as a worker in a nuclear power plant. Yet, the dose of radiation they receive during a cosmic storm or during the span of their career is not quantified or documented.

NASA’s Radiation Dosimetry Experiment, or RaD-X, is a high-altitude balloon project that took place in 2015.
It provided first-time indications of how cosmic rays deposit energy at the top of atmosphere – which produce showers of additional particles that increase the energy deposited where commercial airlines fly. This experiment will improve NASA’s Nowcast of Atmospheric Ionizing Radiation for Aviation Safety (NAIRAS) model, which is currently used by public and private entities for informed decision-making about radiation exposure safety for flight crews, the general public, and commercial space operations.

Low-cost missions, like RaD-X, provide NASA with valuable opportunities to test emerging technologies and economical commercial off-the-shelf components which may be useful in future space missions. Developed at NASA’s Langley Research Center, it will launch from New Mexico and will fly on a scientific research balloon for 24 hours at approximately 110,000 feet. The flight will validate low-cost sensors for future missions and will provide data to improve the health and safety of all future commercial and military aircrews that transit the poles.

In addition, RaD-X will host the first Cubes in Space (CiS) balloon flight opportunity. CiS is a global Science, Technology, Engineering, Art, and Mathematics (STEAM)-based education program for students (ages 11-18) that provides a no-cost opportunity to design and compete to launch an experiment into space. The small cubes are placed on sounding rockets and scientific balloons in cooperation with NASA’s Wallops Flight Facility and the Earth Systems Science Pathfinder Program Office.

RaD-X, one of two hosts for CiS experiments this year, will carry more than 100 small cubes filled with experiments created by students around the US.

1 TEPC Microdosimeter
The TEPC Environmental Monitor model FW-AD1 is built by Far West Technologies, Inc., and is referred to as the “HAWK” TEPC (see Figure I.5-2). The HAWK TEPC measures mixed-field radiation environments, such as those found in space, commercial airlines, and many nuclear reactors. The sensitive volume of the TEPC is a spherical cavity surrounded by the tissue equivalent plastic A-150 and filled with propane gas in order to emulate a tissue volume with a diameter of 2 µm. The TEPC design enables direct measurement of the energy deposition of charged particles in tissue from the ambient mixed-field radiation environment, which may include neutrons and gamma rays in addition to charges particles. The detector provides a spectral measurement of the lineal energy by accumulating a pulse height spectrum, which can be transformed into the ambient dose equivalent as the operational quantity. The TEPC is considered the de facto standard measurement technique in microdosimetry.

The detector’s design was developed under contract to NASA and has been in use for more than 10 years. It has been calibrated in numerous laboratory beam sources (Los Alamos Nuclear Science Center, Loma Linda Medical University, Brookhaven National Laboratory, and more) and used on the Mir Space Station, the Space Shuttle Discovery, other NASA spacecraft, and airplanes. 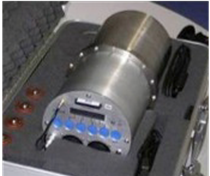 2 RaySure® Silicon Diode Microdosimeter Emulator
The RaySure®, which is manufactured by QinetiQ, is a compact radiation sensor designed for use in aircraft (see Figure I.5-3). The detector utilizes solid-state pin diode technology to measure energy depositions in silicon from mixed-field radiation environments, which may include charged particles, gamma rays, and neutrons. The detector measures dose equivalent and accumulated dose equivalent every 2 minutes. The absorbed dose in silicon is converted to dose in tissue using a pre-determined calibration curve, which is further converted to ambient dose equivalent using a quality factor derived from the measured LET spectra. Hence, the RaySure® is a microdosimeter emulator. The RaySure® has been extensively calibrated via numerous airline flights and ground tests (e.g., CERN, WNR, and TRIUMF particle beams). 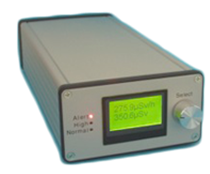 3 Liulin-6SA1 LET Spectrometer
The Liulin-6SA1 semiconductor LET spectrometer was manufactured at the Solar-Terrestrial Influences Laboratory of the Bulgarian Academy of Sciences (see
Figure I.5-4). The detector consists of a silicon diode. Pulse height analysis technique is used to measure the energy deposition of charged particles in the detector. This detector is mostly insensitive to neutrons. The amplitude of the pulses after the preamplifier is proportional to the energy loss in the detector and hence to the dose and LET by a factor of 240 mV/MeV. The amplitudes are digitized by an analog-to-digital converter (ADC) and arranged in a 256-channel spectrum in order to provide the energy deposition spectrum. Calibration factors are used to derive ambient total charged particle fluence and to convert the measured radiation dose in silicon to ambient dose equivalent for tissue. Different modifications of the Liulin LET spectrometer have been built and used on spacecraft (e.g., the Mir Space Station and ISS), aircraft, and calibrated on the ground (e.g., Indiana University proton test facility, Belgium cyclotron facility, CERN, HIMAC, and more). 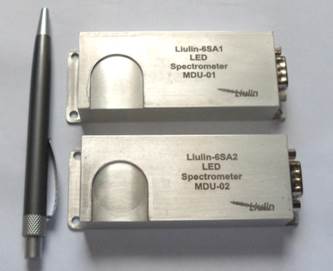 4 TID Detector
The TID detector, manufactured by Teledyne, measures energy absorbed in a silicon hybrid microcircuit from charged particles and gamma rays (see Figure I.5-5). The output of this device is intended to be directly connected to most ADCs or payload housekeeping analog inputs, which makes minimal demands on the host vehicle. The TID has been calibrated at Lawrence Berkley National Laboratory and is successfully operating on the NASA Lunar Reconnaissance Orbiter. The TID is also planned to fly on NASA experimental aircraft. 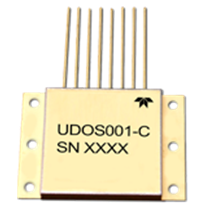